Roaming robots will be one of the new features of the newly-opened hawker centre at Jurong West Street 61, including an incentive to return used crockery and cutlery. Photo: Siau Ming En/TODAY

SINGAPORE – Each time a customer returns a tray of used crockery and cutlery at designated areas, the machines at the new Jurong West Hawker Centre will dispense 20 cents as an incentive.

This was one of the new features of the newly-opened hawker centre at Jurong West Street 61 on Sunday (Oct 8), including the use of three roaming tray-return robots and payment systems that accept both cash and cashless options.

The new centre houses 34 cooked food stalls, 14 market slab stalls and has a seating capacity of about 500.

It is managed by social enterprise Hawker Management – a subsidiary of food centre operator Koufu, on a not-for-profit basis. Each cooked food stall, for instance, has to provide two meals that are priced at S$2.80.

Mr Tay said: “This hawker centre and market is a much-awaited addition to the community. I am pleased to see that residents are enjoying the variety of stalls and the modern conveniences offered. The social initiatives that will be rolled out also makes this hawker centre a natural gathering place for residents to bond and enjoy their meals together.”

“We have managed food courts for a very long time. So when we were awarded the hawker centre, we looked at the efficiencies that we have done for food courts, we adapted it and brought it over”, he added. The robots for instance, helped achieve a 50-60 per cent tray-return rate, as compared to the 20-25 per cent rate in other places.

While the robots in Jurong West are there to help diners who may not be able to carry their trays to the return area, a Hawker Management spokesperson said the 20-cent incentive, which operates using radio frequency identification, was to encourage diners to return the trays on their own. No deposit by diners is required. This is the first hawker centre in Singapore to have such an incentive-based tray return system, said Hawker Management

In other hawker centres situated in One North and Yishun managed by the Timbre Group, customers are required to pay a dollar deposit when they get a tray from hawkers to carry food items to their tables. When they return the tray at the designated return point, an automated system will dispense the dollar deposit to them.

Customers at the new Jurong West hawker centre were also seen using self-payment kiosks on Sunday. The kiosks allow them to either drop cash into machines or use cashless options such as NETs and credit cards.

Hawkers new to the trade occupied six cooked food stalls at the centre as part of the Happy Hawkerpreneur Programme, set up by Hawker Management to groom aspiring hawkers.

One of them was Mr Jackson Tan, 24, who runs a stall selling vegetarian food in different culinary styles.

Previously an operations manager, he noticed there are relatively limited and traditional vegetarian choices here and decided to sell vegetarian dishes to promote these healthier options to the younger generation.

His stall offers about 10 to 12 dishes, including kimchi ramen, mock fish burger and vegetarian pizza that cost between S$2.80 and S$5.90.

Through the programme, Mr Tan said Hawker Manager waived the stall’s first month rental and covered the costs of the signboard, among other things.

Another new hawker was Ms Lim Peck Ngoh, 42, made the career switch after spending more than 20 years working as a planner and buyer in the engineering industry.

She now runs a stall selling nasi lemak, which is based on her 72-year-old mother’s recipe. Her mother used to operate a business in the Outram area.

“I had a plan to start up this F&B business a few years ago and I found that this was a great opportunity for me to (take) my first step – I intend to have a food chain locally and expand overseas.”

Engineer Chew Han Yi, 33, said the new features at the centre were innovative but questioned if the elderly could have difficulties following the English instructions for the self-payment kiosks.

He added that while the 20 cents incentive was one of the better ideas to get Singaporeans to return their used trays, some could try to abuse the system in order to obtain the extra coins.

Murata Manufacturing Co., Ltd.
Chairman of the Board and President:
Tsuneo Murata

Summary
Today, Murata Manufacturing Co., Ltd, announces the release of our latest RAIN RFID tag designed for embeddable applications. This new product has been in production since August 2017.
Overview
RAIN*1RFID adoption rates are rising as companies realize its value in inventory tracking and product traceability, but small consumer goods have posed a challenge due to the reduced space for labels. Murata, a primary leader in multi-layer ceramic substrate, has integrated a RAIN RFID chip and antenna to create a complete RFID tag, perfect for use on small items. The 1.25 mm square package, with a height of only 0.55 mm, is uniquely suited for use in eyewear, watches, and other wearable accessories, as well as healthcare applications like test tube sample identification.

Background
Impinj, a leading provider of RAIN RFID solutions, and Murata have partnered to bring RAIN RFID technology into the broader market. Taking advantage of the Impinj Monza R6’s small die size and high sensitivity, Murata successfully developed their ultra-small integrated tag that can be either attached or embedded into a wide range of applications. It can be used not only to identify products during the manufacturing process, but also to provide traceability in the aftermarket. This supports both businesses and consumers against counterfeiting and enhances brand protection.
Two potential use cases for the LXMSJZNCMF-198 package are surgical tools and test vials. Biochemical products need to be strictly temperature-controlled, which can make it difficult to scan visual labels due to condensation or contamination. The LXMSJZNCMF-198 package is small enough to be embedded directly into test vials, allowing it to be read by RAIN RFID readers for automatic vial tracking.

Thanks to the new LXMS-198 package, manufacturers and retailers of small items can take advantage of all the benefits RAIN RFID has to offer, said Carl Brasek, Senior Director of Product Management Silicon Products at Impinj. With Murata’s new package and Monza R6’s superior performance, item size and materials are no longer barriers to using RAIN RFID solutions. We’re pleased to partner with Murata in to bring this innovative product to market.

*Impinj and Monza are registered trademarks of Impinj, Inc.

See the lineup here.
See the data sheets and the technical information here.

Murata Manufacturing Co., Ltd. is a worldwide leader in the design, manufacture and sale of ceramic-based passive electronic components & solutions, communication modules and power supply modules. Murata is committed to the development of advanced electronic materials and leading edge, multi-functional, high-density modules. The company has employees and manufacturing facilities throughout the world. For more information, visit Murata’s website atwww.murata.com

A manufacturer of on-metal radio frequency identification (RFID) tags for asset-tracking has the maritime container shipping sector in its sights after launching a new product series.

Xerafy has added new additions to its Trak Series that are more versatile and accommodate multiple attachment methods for more applications.

The new Container Trak 902-928MHz tag has a 20-meter read range and a new anti-UV industry-grade polymer casing that is IP68 rated, meaning it can withstand harsh outdoor environments and exposure to water and contaminants.

Container Trak tags, attached by using a rivet hole, a cable tie, or with high-performance adhesives, have an operating temperature range of -40 degrees Celcius to +85 degrees Celcius.

Xerafy will officially debut the new tags at the RFID Tomorrow conference in Dusseldorf over September 27-28, 2017. 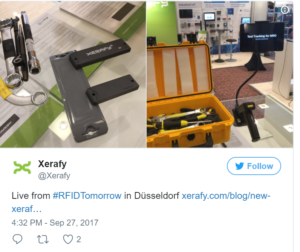 The new level of durability means that a tag can last up to 10 years in harsh industrial environments.

Dennis Khoo, Xerafy CEO and Founder said: “With the launch of our new and upgraded Trak Series tags, our family of RAIN RFID tags is complete.

These new tags have expanded our high-performance RFID solutions to a wider variety of applications and environments.

“With the release of the new Trak Series tags, we can help our clients extend the value of our high-performance RFID tags, whether they are used in a warehouse, on a vehicle chassis, or exposed to water, extreme temperatures, or other harsh conditions.”