TROY DESIGN & MANUFACTURING COMPANY USES ZEBRA RFID SOLUTIONS TO AUTOMATICALLY TRACK AND VERIFY EVERY STEP OF ITS VEHICLE CONVERSIONS IN REAL TIME – FROM RECEIPT TO COMPLETION.

Troy Design & Manufacturing needed an automated tracking system to monitor and guide each step of its +150 daily vehicle conversions at its new Chicago Modification Center.

Troy Design & Manufacturing (TDM) is a Detroit-based Ford Motor Company metal stamping subsidiary that was expanding into the vehicle conversion business with its new Chicago Modification Center, where it planned to convert +150 base-model Ford vehicles into police interceptors each day. TDM realized a manual, paper-based tracking system would not be efficient enough to handle operations. And while barcoding and fixed terminal entry would certainly be beneficial, these methods alone would still not provide the level of automation that TDM needed. A highly automated, computerized infrastructure would need to be implemented to more efficiently track, guide and report every step of vehicle conversion.

TDM selected trusted Zebra partner, Lowry Solutions, to implement its robust vehicle tracking and guiding vision. Zebra hardware was chosen not only because of Lowry’s relationship and familiarity with its products but also because TDM had done extensive research and heard numerous industry recommendations favouring Zebra over its competitors. Coupled with Lowry’s Work-In-Process software, Zebra FX9500 Fixed RFID Readers and AN200 RFID Antennae would comprise the Chicago facility’s tracking infrastructure.

Automated work-flow enabled by RFID led to more precise visibility, data collection and consistency than anticipated, setting a higher standard for facility efficiency and potential. With its vehicle tracking infrastructure deployed, TDM has found numerous advantages with RFID automation. Operators are more focused on performing their tasks and their workflow is streamlined with less paper-based documentation and tracking duties. Vehicle visibility and conversion progress data have prevented downtime, and the consistency and reliability of RFID data capture has provided further insight into the facility’s capabilities.

Operators are more focused on performing their tasks, and their work-flow is streamlined with less paper-based documentation and tracking duties.

When TDM began drafting its concept model for the Chicago Modification Center, it realized that manual, paper-based documentation would not be robust enough to track all of its customers’ vehicles while meeting its production targets. TDM was confident that it needed to implement a form of automatic data capture across its processes and needed to select between primarily adopting barcoding or RFID. TDM IT Manager Chris Morgan explained, “As we worked through it, we realized that we would need something more ‘hands-off’ both so we could reduce the amount of movement required of the operators and to ensure that we were tracking and timing the vehicle from the moment it enters its cell. We didn’t want to rely solely on the operator to report this later. That’s what got us going down the route toward RFID and we knew the majority of the industry relied on Zebra.”

TDM selected Lowry Solutions to help establish it’s RFID vision. Morgan explained, “We did some research and came across Lowry Solutions, who had some experience in the environment. They were recommended through Ford Motor Company, our parent company, and proposed an agile software development process using RFID”. TDM research yielded an RFID case study conducted at the Ford Cologne-Niehl plant involving Austrian RFID middleware specialists, 7iD, which featured real-time vehicle tracking similar to what TDM had in mind for its modification centre. Lowry then contacted 7iD, and the three organizations began outlining strategies and logistics for the Chicago facility. 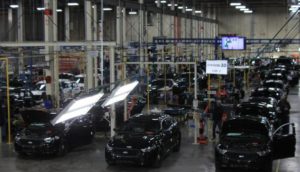 To stay within TDM’s budget and aggressive timeframe, Lowry conducted vigorous prototyping and testing while maintaining a steady dialogue with TDM throughout the development phase, sharing interactive progressions of prototype updates, and making adjustments based on TDM feedback. Its agile development process led to a Work in Process (WIP) software application that seamlessly integrated with 7iD middleware and Zebra FX9500 Fixed RFID Readers and AN200 RFID Antennae. Paul Rakowicz, Vice President of Software Development at Lowry, explained, “We received regular feedback from TDM, so when we got to the implementation phase, TDM already knew what they were getting because they were involved in the development process. There were no surprises because they had seen, touched and participated in everything”. Timeframe demands were successfully met thanks to this hands-on tailoring and collaboration. The completed solution is able to generate RFID tags with complex work instructions, bill of materials and tracking numbers tied to the vehicle’s VIN number as it enters the facility. With this information, operators can direct vehicles through production cells with real-time guidance solely from automated RFID scans and reads.

The application makes decisions and directs traffic flow based on the information in the system, and it’s hands-off, so our operators aren’t riffling through paper, trying to see where things go and needing to make decisions. “It’s all very visual”, says Morgan. During the test phase, time studies showed RFID scans shaving 5-7 seconds off total work station time compared against barcode scans, significantly saving time considering each of the +150 daily vehicle conversions can go through up to 10 work stations. Morgan further elaborated, “We can now capture time and date stamps without hand scans, documenting what activity occurred when vehicles were at checkpoints. Automating data collection makes everything very consistent and reliable. The real-time visibility provided by RFID offered even more opportunities for streamlining operations than previously anticipated. Morgan explains, “In the beginning, we had each individual conversion step signed-off by the operator, but we quickly realized that this was overkill, and because we were tracking data at a higher level, we didn’t have to tie down our operators with what they were recording. We still get the same value out of the information”. And because WIP interfaces with Ford Motor Company’s corporate database, TDM is able to use RFID to report vehicle receipt, production progress and shipping updates back to Ford in real-time. Morgan said, “Overall, I would say the infrastructure itself exceeded our expectations. With the improved tag read rates and consistency, and the overall visibility that the system provides, we are always able to see where vehicles are at in the modification process inside and outside of the facility with a higher level of efficiency than anticipated.”

TDM is on the cutting edge of innovation, especially with its implementation of RFID. With its abandonment of manual, paper-based tracking, over 90% of its operations are already automated by RFID, and Morgan still sees more opportunities to utilize the technology. “There’s always the potential for expanding our current operations and our infrastructure. We’d like to add RFID to even more work stations to increase our visibility both inside and outside of the facility. Right now we’re still using barcodes in some areas, especially in slow content and repair areas, but we’re looking to expand capabilities. As TDM starts exploring even more ways to leverage RFID, the reliability and consistency continues to provide Morgan with the gratification of knowing that we successfully recorded every vehicle that has left the building.”

CYC Movers which started as a house mover in 2003, now offers a suite of relocation solutions including commercial, information technology (IT) infrastructure and international relocation. A logistics arm added in 2004 handles freight and customs solutions, warehouse management, last mile deliveries and reverse logistics.

END_OF_DOCUMENT_TOKEN_TO_BE_REPLACED

The scheme is currently pending a series of trials before full-scale implementation, though RWS said ‘no firm date’ has been set for its commencement.

Jason Horkin, vice president of attractions at RWS, said, “These tags will allow our park guests to pay for services including food & drinks, retail products, as well as top-up their admission for marine interaction programmes.”

END_OF_DOCUMENT_TOKEN_TO_BE_REPLACED

At the Timbre+ hawker centre in one-north, over 95 per cent of diners return their trays after meals.

This impressive figure is not the result of an ongoing campaign or the use of prominent signs. It is thanks to an innovative radio frequency identification (RFID) tray-return system.